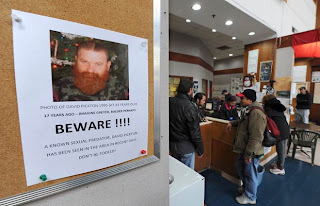 Well, convicted sex offender Dave Pickton is in the news again. Earlier this month, scared women on Vancouver’s Downtown Eastside put up posters warning that the brother of infamous serial killer Willie Pickton has been seen in the area. “BEWARE!!! Don’t be fooled!” reads the poster, under a 1995 picture of Dave Pickton.

Now, he contacts the newspaper claiming he has started another nonprofit and is fundraising for poor children in Africa. I think we have a legal liability to notify the good people of Ghana that Dave Pickton is a convicted sex offender.

Dave Pickton was convicted of rape in 1992 on the same pig farm his brother was convicted of murdering and mutilating numerous women. Not only that, but during Pickton's trial Dave was accused of another rape. The victim claimed in 1999 he tied her to the bed with bungee cords and tried to shove pills down her mouth. Sgt. Dan Almas said he was aware of that allegation, and agreed that pills and bungee cords were found in a search of the younger Pickton's bedroom but stated "Someone who is alleged to have committed a serious sexual assault does not a murderer make." No but someone alleged to have committed a serious sexual offense should be charged and tried for that serious offense.

One of the most disturbing elements of the Pickton case was that Dave Pickton knew where bodies were buried on the farm. If that doesn't make him an additional suspect it surely makes him an accessory to the crime.

Recently we heard that the Hells angels ran an illegal booze can on sight right across from the Pickton farm which also contained a grow op run by the Hells angels. Yet Dave Pickton was the one who ran another supposed charity called the Piggy Palace Good Times Society. So was it a Hells angels booze can or was it Dave Picktons? Sometimes it's hard to tell. Either way letting him raise money for the disadvantaged is shocking to say the least. It's rather disappointing he still shows no regard whatsoever for the East Vancouver homeless. You'd think he'd have a little more compassion and remorse since so many of them were murdered and mutilated on his farm.