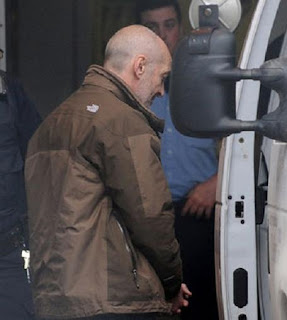 Last month two mob murders in Montreal are of interest. Vincenzo Scuderi, 49, was shot dead outside his home in Montreal's north end and Tony Callochia, 51, was shot several times outside a restaurant just north of the city.

Scuderi was killed outside his home in St. Leonard, the historic centre of Montreal's Italian community. He was reportedly connected to Raynald Desjardins, a major player in Montreal's organized crime circles who was once close to Mob boss Vito Rizzuto. Scuderi was the second close associate of Desjardins killed in the past several weeks; Gaetan Gosselin, 69, was killed on the street in Montreal on Jan 22.

"The current relationship between Desjardins and Rizzuto is unclear. Sources tell QMI Agency that the once-close relationship between the two men is likely over. Desjardins is currently awaiting trial for the murder of Salvatore Montagna, the former head of New York's Bonanno crime family. Montagna's body was pulled from a river north of Montreal at the end of 2011."

On that note, One of six men arrested in connection with the murder of mafioso Salvatore Montagna will see his charges upgraded to first-degree murder. The Sûreté du Québec announced Wednesday they rearrested Pietro Magistrale, 61, as part of the same investigation that saw him charged, in December 2011, with 19 counts related to four firearms seized during the investigation into Montagna’s Nov. 24, 2011, murder. Mob slayings rise after Rizzuto's return.