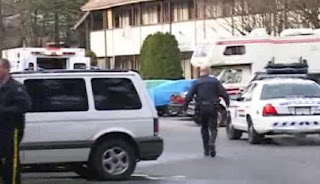 The Vancouver Sun is reporting that the Surrey RCMP have arrested three men after a man was left bleeding from gunshot wounds to both legs in central Whalley Sunday. BC Daily Buzz reports that Police responded to the targeted shooting of a 53-year-old man 9 a.m. Sunday in Cedar Gardens Apartments, at 13370 King George Blvd. Five men, four Caucasian and one Black, appeared at the man's door, sprayed him with pepper spray and shot him in the stomach. Police say the heavy-set Iranian man who was shot, is known to police.