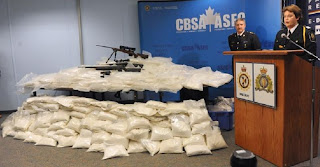 CBC is reporting that Drug busts by the Canada Border Services Agency rose 10 per cent between 2007 and 2012. So why would the Harper government instruct Canadian border agents to change their focus and not prioritize drugs or organized crime but to focus on human smuggling related to refugee and immigration reform? You can’t get any more corrupt than that. Knowing we’re in a gang war fueled by the cross border pot for cocaine drug trade, telling border agents not to prioritize that is criminally negligent and politically suspect.

This isn’t new information. We were told about the government’s new directive before although I can’t locate the story in the archives yet. This story just reaffirms the directive and compares it with the increase in drug related statistics showing once again how corrupt the Harper government really is. Cuts funding for the RCMP, the gang task force, the prisons and now tells border agents not to worry about looking for drugs. That's not very tough on crime at all.