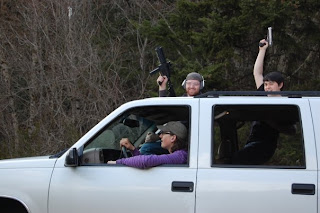 News 1130 is reporting that one man is in hospital after a shooting last night in Abbotsford. The shooting happened just after 10 p.m. at Gladwin and Downes Road. Witnesses say shots were fired from one car into another as both were heading east on Downes. Abbotsford Police Sergeant Casey Vinet says shortly after that one man showed up at the hospital.The 20 year old victim is known to the police. Here's a double shooting in Abbotsford from back in 2009.