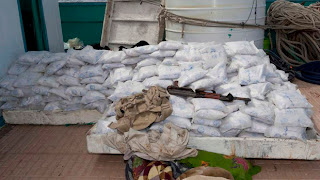 Well this is somewhat ironic. Afghanistan is the largest heroin producing nation in the world. At least it was brought back to that status after the allied invasion. The Taliban had almost completely stopped the heroin production in Afghanistan the year before the invasion.

Yet the Department of National Defence says HMCS Toronto seized around 500 kilograms of heroin from a boat in the Indian Ocean on Friday. No doubt some of that could have ended up on Canadian streets. We have a freaking safe injection site for God’s sake where drug dealers sell it in public without consequence. Things that make ya go hmmm…