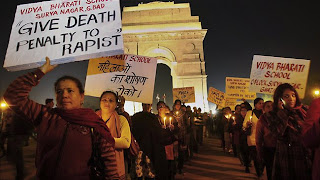 This is another example of the polarization of good and evil. Not long ago there was a huge public outcry in India when a woman was gang raped and brutally murdered. The public outcry was good and the deranged brutal gang rape was evil. We’re told that one of the suspects has died in prison. Apparently by suicide.

Not long after, despite the public outrage, there was another brutal gang rape involving once again another bus driver. The driver drove past the woman’s stop and took her to a place where he met up with some other men and gang raped her. Astonishing given the public outcry of the previous incident.

Now the breaking news is yet another gang rape in India, this time of a Swiss tourist. Obviously a lot of people are rightfully outraged by this kind of conduct yet it continues. Thus we see a small percentage of the population who revel in deranged acts. Dare I say 1% of the population. As I’ve previously mentioned, back in the day the term 1% meant cream of the crop, not bottom on the barrel. Now the term has clearly changed it’s meaning.

Rape is a horrendous crime. Gang rape is simply deranged. I’ve made references to needing some time with Doctor Phil. When I say that I’m being sarcastic because I can’t stand that show. All the drama and touchy feely talk is beyond me. Yet when we see this plague of parasites who revel in gang rape it is clear a mental problem exists that needs to be addressed.

This brings us to Prince George and the Devil’s Butler. In Prince George there were two cases where members of the GTS were charged with gang rape in the Renegades clubhouse. Both cases the accused got off. In one case the judge said because the victim went to the clubhouse and accepted cocaine from them, she was not a credible witness. Another example how a corrupt judge can pervert the law. No means no. If the victim was a willing participant in a sexual act with one person, and several others join in against her will, then that is still gang rape. Taking drugs does not forfeit your right to say no and mean that it’s legal to gang rape the person after wards. That judgment is a stain on all of us.

Then we have that other case in Prince George where a young woman and several young men beat and sodomized a young teenager almost to death and left him for dead in a snow bank. This is the epitome of mental illness. Calling anyone who reports that crime or testifies in that case a rat on in their case a squid is deranged. It is a sign of a mental illness. It is abnormal behavior.

I always tell young kids to experience travel. Get out of the fish bowl and see that life in the real world isn’t the same as the bizarre ideals held by a few peers in a small town or a small borrow of a big city. Joking about sodomizing anyone with an iron rod or a broom stick is really messed up.

Realizing there is likely a publication ban on that trial and that I have no idea what has been said in court, I did notice lately, one of the accused had a picture on facebook of them with a cat. One of the commenters joked and said be careful or the car gets the broomstick and everyone else was laughing. These are sick kids and I don’t mean sic yo I mean they are really messed up.

One blog reader wrote in suggesting that those who participated in the gang rape in India with an iron bar should be gang raped in public with an iron bar. I certainly don’t sustain that but I can certainly understand their outrage which is normal and healthy. Joking about it is not. Personally I think a firing squad would be more humane and appropriate.

I think Utah is the only state that still has the death penalty by way of firing squad. I realize Amnesty International does a lot of really good work raising public awareness about political prisoners. I’m not sure if I would support that same zeal in the removal of the death penalty in all cases. Cases of serial killers or gang rape makes me wonder if sometimes the death penalty might be appropriate. Clearly these young kids in Prince George who are joking about sodomizing a cat with a broom stick after they sodomized a teenage boy with a broom stick need a reality check.

As I’ve mentioned, that book about The Devil’s Butler referring to someone the Vancouver Satan’s Angels kidnapped and sodomized with a broom stick is a historic example of a deranged behavior that has continued. The Vancouver Hells Angels were caught trafficking cocaine through puppet clubs in Prince George many years ago. Ricky Ciarniello's involvement with David Black and the Devil’s Butler is very disturbing. 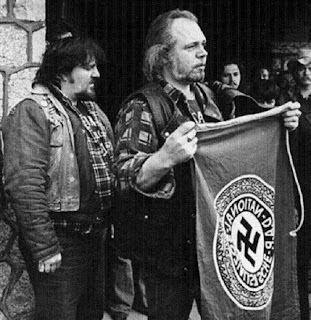