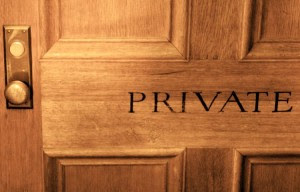 The public were banned from the Surrey Six trial today. I need to find out more details as to why. A publication ban does not mean the public or the press are not allowed. It means they are not allowed to publish any evidence the jury was not present to hear. After the publication ban is lifted they may. If they aren’t allowed to be present they won’t have anything to report when the ban is lifted.

Sometimes portions of a trial can be in camera or in secret so to speak, when national security in at risk or when one client asserts privilege such as attorney–client privileged communications. We know this applies to Jamie Bacons’ case but that is separate from the other trial so it should not apply today in this trial.

Today: “The court door entrance was covered in newspaper so no-one could see in, the door was locked and it said 'do not enter there is a publication and disclosure ban in effect' or words to that effect.” It didn’t say in camera. A publication ban has nothing to do with denying the public or the press entrance. We know there is a publication ban regarding any evidence that might have anything to do with the RCMP case where an IHIT officer had an affair with DK’s former girlfriend. Please don’t tell me this is another cover up.

Today, March 7th, the trial was in camera again. I’m told the trial will be public but was private yesterday due to “sensitive” audio. There is a huge confusion as to when the case will be public. You just get the colossal run around when you ask why it went in camera. The court will put you through to the Crown, the Crown refuses to answer the question and puts you through to the media representative who has his answering machine on. This is sadly shocking. This latest act of treason is brought to you by Madam Injustice Catherine A. Wedge who is clearly sitting on the wrong side of the bench. An interim publication ban does not ban the media or public. Welcome to Canada’s new Iron Curtain.

Today, March 8 2013, the Surrey Six hearing in courtroom 209 at the New Westminster courthouse was under publication ban but was open to the public. Wednesday and Thursday they were in camera meaning the public were not allowed in. Still no reason given why it was in camera. 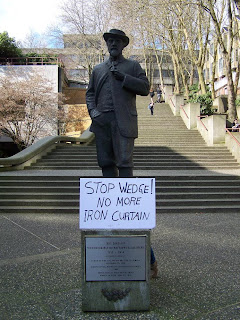 I am told there was a protester outside the courthouse this morning objecting to Judge Wedge’s decision to hold the hearing in camera. The Clifford Olsen trial and the Robert Pickton trial were high profile cases that had publication bans but the public were still allowed to attend. We are going to have to stay viligant and keep an eye on them to see if they go back in camera. If you show up at court and are denied entry, please let me know. Cheers.