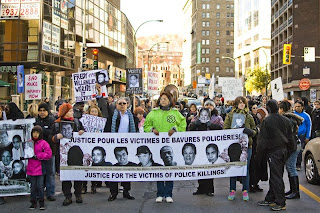 Well this is tragic. We know the student protest got out of hand with rock throwing and looting. Then they went for the protest in your underwear which wasn’t as violent. Yet declaring this annual police brutality protest illegal is once again a violation of the charter of rights. Especial this year with the release of the Rodney King like video of an arrest in Trois-Rivieres where the police gave the guy the boots. Citizens have every right to march and express their concern over that.

More than 250 people were arrested at the protest. According to Montreal police, the majority of people were arrested under municipal bylaw P-6, which makes it illegal to cover one's face while taking part in a protest and for failing to provide authorities with an itinerary.

OK covering your face during a protest is a concern. Especially with all the history of rioting in Vancouver as well as Montreal. Covering your face and looting is not a charter right. Organizing a mass protest in the middle of the night is a valid concern. Not supplying an itinerary isn’t.

Two things we need to examine, well in all fairness three. First we need to examine the sacred charter right to freedom of assembly and the right to publicly protest to petition the government for a redress of grievance. Making that illegal is illegal. It is a violation of the charter of rights which is the highest law. So if people were arrested who were not wearing a mask or causing problems then they need to sue the police for unlawful arrest along with the Civil Liberties Association and sue for damages. That’s the only way it’ll stop. Violence is not the answer.

The next thing we need to examine is the recent video of police brutality in Trois-Rivieres that people are rightfully concerned about. The suspect had surrendered to police and was lying face down on the ground with his arms outstretched. All the officers run in and give him the boots. What the officers did is wrong. Failing to admit that and arresting people for expressing their concerns isn't right.

In all fairness we also need to look at how rioting and looting is not a charter right. It outrages the public and destroys the cause. People are suspicious of provocateurs who are paid to cause problems to give the police a reason to crack down on them. Yet there are many who just like violence. If you are in a protest, you need to denounce and separate yourself from the violence. If you’re still arrested you need to sue for unlawful arrest. Last year this same protest was totally inappropriate.

There nothing worse that a lunatic protester screaming f the police and challenges them to a fight before claiming police brutality. Idiot. This video however is not of that. It’s just like the Kelowna video where then police officer kicked a compliant suspect in the face when he was on his knees. It destroys public confidence. Yet no one likes lawlessness. That destroys public safety. 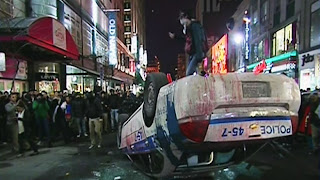