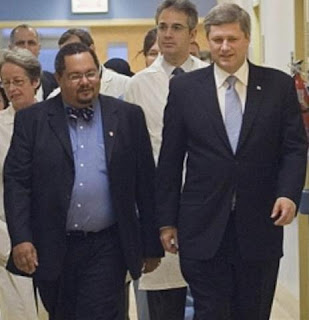 Arthur Porter is back in the news. This is Stephen Harpers’ pal that stepped down as the chair of Canada’s watchdog for CSIS. He stepped down as links to him and an Israeli arms dealer tied to Iran Contra named Ben-Menashe went public. Now he’s named in an arrest warrant issued by Quebec's anti-corruption squad for allegations of fraud.

The Vancouver Province is reporting that: “The warrants say the men are wanted on numerous charges - including fraud, breach of trust and document forgery - in relation to the $1.3-billion construction of a Montreal mega-hospital.

The others being sought are: former SNC-Lavalin senior executives Pierre Duhaime and Riadh Ben Aissa; former high-ranking hospital executive Yanai Elbaz; and Jeremy Morris, the administrator of a Bahamas-based investment company linked to the fraud allegations.”

So here we have someone tied to an Israeli arms dealer connected to Iran contra, that is now charged with fraud and accepting bribes in connection with the Hells Angels control of Quebec’s construction industry, in charge of watching over Canada’s spy agency. Isn’t that ironic?

Harper’s response of course was to get rid of the watchdog agency altogether so CSIS can continue business as usual without any lawful accountability whatsoever. Things that make ya go hmmmm. Or should I say: No way dude…

Arthur says he’s too ill to travel back to Canada to face fraud charges. He’s busy living it large in the Bahamas. Speaking of Israeli arms dealers tied to Iran contra, Yanai Elbaz and Riadh Ben Aissa sound like Israeli names. Riadh Ben Aissa was arrested in Switzerland of all places.