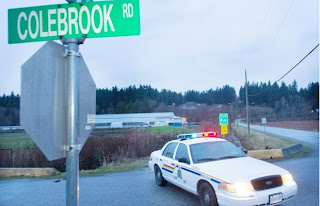 Freddy was right. Kim Bolan, the Vancouver Province, CTV and CBC are reporting that two more bodies were found on Colebrook Road in Surrey this morning. One blog reader wrote in and recounted how the two suspects that assaulted that Surrey sex trade worker did so on Colebrook road. That is messed up.

The Vancouver Province is reporting that “Sgt. Jennifer Pound said the first body - an unresponsive male at the side of the road near 125A Street - was spotted by a uniformed officer on "proactive" patrol around 2 a.m. Wednesday. When additional officers were called to the scene, a police dog team found a woman's body a short distance away.”

Kim Bolan is reporting that “The man’s body was found in the exact spot where 29-year-old Delta resident Amritpal (Paul) Saran was found burned and dumped on Feb. 24.” If I’m counting right that makes ten homicides this year so far in Surrey alone. That’s including Janice Shore who was brutally assaulted in Whalley December of last year but died of her injuries this year.

Update: Police have identified the two dead bodies found on Colebrook road early Wednesday moring. One is 54-year-old Brett Sheldon Lietz. And the other is 40-year-old Nicole Madelynn Brochu. Brochu had a criminal record between 1989 and 2003, while Lietz had no record at all. The two victims were known to each other as they were living together as roommates. Police also state it is likely they were both shot at the location they were found in.