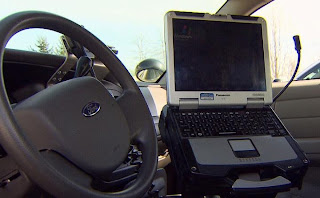 Don Pitcairn wrote an interesting article in the Naked Truth about the proposal to let RCMP confiscate cell phones from drivers. I have to agree that’s going a bit too far. Don’t tell me it’s Bill Fordy’s idea. Don mentioned that the police computers are also very distracting for drivers. He made reference to the Ashley Guiboche coroner's inquest who was killed by an RCMP cruiser.

A blog reader recently wrote in expressing the same concern when Guelph Police Const. Jennifer Kovach, 26,was killed when she apparently lost control of her cruiser and crashed into a bus. They also cited a case last month where a Vernon officer heading northbound on Hwy 97A came into the right hand curve approximately a 1/2 km north of Pleasant Valley Road. He left the road on the right hand side and rolled the vehicle, coming to a rest on the passenger side.

Clearly those police computers can be just as much of a distraction as a cell phone. Texting while driving should result in a ticket but they should not confiscate the cell phone. Seizing your car after two drinks isn’t right either.