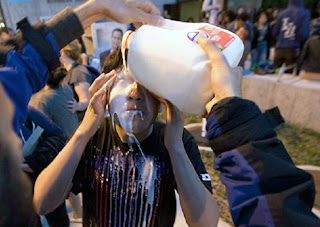 There appears to be yet another shooting in Surrey but since it didn’t result in a fatality, isn’t making big news. CKNW is reporting that “Just before midnight, the victim walked into a convenience store on 104th Avenue and 131st Street. He grabbed a jug of milk, went outside and poured it all over himself.”

We know that people use milk to relieve the pain of being pepper sprayed and that was indeed the reason he claimed to have done it. So a guy gets pepper sprayed and shot, walks into a convenience store and pours milk on his eyes. Evidently the gunshot injury didn’t prevent him from walking. The Vancouver Province is reporting that it happened midnight last night / this morning.