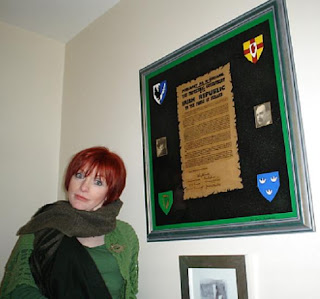 This Saint Patrick’s Day I was going to write a post about the Irish Proclamation. Then I thought St. Paddy’s Day is more of a fun celebration and that was more a political remembrance saved for Easter. Then Freddy goes and posts a link to that disgusting piece of British slander that contained likely the most offensive statement in recorded history that makes me want to throw up.

Foreign occupation is not noble. It’s known as tyranny. William Wallace fought the British occupation in the movie Braveheart. He was not a murderous terrorist. He was a patriot who supported a free republic. Historically, England resisted Rome’s attempt to invade and occupy their land. I remember reading in the History of the Kings of Britain how the British sharpened logs to a point and submerged them in the river Thames to puncture the hulls of the invading Roman ships. That resistance was good.

Slandering the Irish is something I just don’t have the time of day for. After England was invaded by Rome they became educated in many things including warfare. England wasn’t the only country that participated in Imperialism. France, Spain and Portugal did as well. Foreign occupation is not a good thing. It wasn’t good when Hitler did it. It's not good good when anyone else does it.

I am told that there has been considerable progress in the peace process in Northern Ireland. Ian Paisley, the devil himself, finally agreed to Stormount and a local parliament. Yet once again a minority continue to want violence and say that is not enough. Michael Collins déjà vu.

They called Michael Collins a traitor because he brought back a deal that saw Southern Ireland become a free state which then became a free republic. Collins said that was the best we were going to get. Some said it was not enough and they started killing their own brothers as a result.

Today we see troubles return. Some are protesting and some of those protests are being shut down. We remember Bloody Sunday. Both of them. Those were not noble soldiers that fired on unarmed civilians. They were murderers who killed innocent civilians.

Many of the protestant paramilitaries are just as extreme. “Derry West Bank Loyalists still under siege, No Surrender.” Let it go man. That was a very long time ago. The majority of the people want peace. There is no place in Ireland for hate and intolerance any more. It’s just like that song the Town I loved so well.

This year I don’t feel very Irish. I don’t feel very British either. I feel pretty Paul Gross in the TV series Due South. I’ve never been a police officer but I support law and order and I love the outdoors. I feel at peace snowshoeing in the mountains or paddling in the rivers and ocean. Eastern Canada has a lot of history and culture. We don’t have that on the west coast.

On the west coast the history and culture we have is what people who come here bring with them. In the Vancouver mountains you’ll find people from all over the world. Speaking Russian, German, Iranian, or any of the Asian languages. All of these people share a love for the outdoors that I can relate to. I’m just a driver on a western highway.

Although 51% of the people in Northern Ireland want to remain tied to England, 49% do not. That 49% have a right to record their dissent. Tragically Marian Price’s sister Dolours Price was found dead in her home after claiming Gerry Adams was involved in the IRA back in the day. Like that comes as any big surprise. A salute to Dolours Price and the town I loved so well.