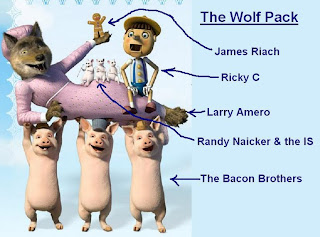 Let’s get one thing straight: the Bacon brothers are not notorious. They are not respected in Surrey. They are despised here. They’re just a couple of suburban princesses empowered by Larry Amero’s Big Red Lie. In Surrey everyone rather cheer on a clown like Khun Khun than support the three little piggies. Well two now if you don’t count their irresponsible parents. Jonathon and Jarred were preps and Jamie was just plain awkward. That's why they moved to Abbotsford.

Recently there was a book published about the “Notorious” Bacon Brothers. The media first started using the term notorious yet glorifying these idiots is in no one’s best interest. There used to be a famous rapper who was shot dead who was referred to as the Notorious B.I.G. or Biggie. Using that same term on a couple of worthless pieces of pig sh*t from Abbotsford is a joke.

The book does point out one thing. These idiots aren’t from the hood. They are suburban princesses empowered by Larry Amero’s Surrey Girls. Yet with all these murder trials coming to head, before we start cheering anyone on, it’s important to pause and reflect on the obvious. There is nothing admirable about murder. A group of grown men beating a father to death with baseball bats and hammers is disturbing. Just like the Michael Levy swarming.

The whole concept of joining the ranks of murders is so Clifford Olsen. It’s like that song by Rihanna where she says she doesn’t want to be a murderer. Nor do I. We can talk all hard core but really, that is not something I personally want to be. Obsessing over all these murders without realizing that isn’t healthy. We start to lose touch with reality and humanity. We start thinking that swarming and sodomizing someone is cool when it is very far from it.

In the movie Green Hornet Cameron Diaz was the brains of the operation. She told the dynamic duo what to watch out for. She said the crime boss would invite them to a secret meeting to try and kill them just like John Gotti did to Mangela. Well isn’t that special. It’s all about betrayal driven by selfishness and greed. Buyer Beware. That is Notoriously Wacked.

Update: Turns out the author of this new book on the Bacon Brothers is a very credible journalist and accomplished author from Ontario. My concern is glamorizing the pork sausage which is the last thing anyone needs. Eileen Mohan expressed her concerns about glorifying those deviants for killing her innocent son and I agree.

I’m not saying don’t read the book. I’m just saying read it with a grain of salt knowing how hated those suburban princesses are locally. In contrast I would highly recommend another book by the same author called: Fallen Angel: The Unlikely Rise of Walter Stadnick and the Canadian Hells Angels. Walter Stadnick was Mom the armed rapist Boucher’s pal. Walter was 5’ 4” tall.