We remember hearing about Kelvin Williams, Russel James Renneberg and George Salazar Barnett from Bandera Gold getting arrested in Mexico for fraud and charged with money laundering for the UN gang. The police report even mentioned Elliot Castaneda "Taco" and Ahmet Kaawach who we all know locally to be members of the UN gang who were gunned down in Mexico.

Well now there’s another link to Bandera gold and money laundering. Pablo Antonio Fitch Parente is listed on the Kingpin Act as a money launder for Rigoberto Gaxiola Medina’s drug network. The drug network had a tunnel going in to Nogales, Arizona from Mexico. Pablo is also mentioned in Bandera Gold’s report as the beneficial owner of the Consuelo and Lucerito properties. We also found a contract about Cinco Minas concessions between George Barnett and Pablo Antonio Fitch Parente. 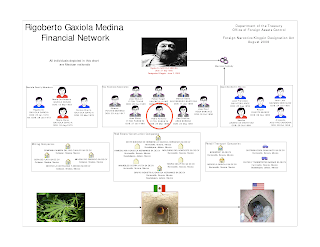