Kelowna Hells Angel turns himself in to Police 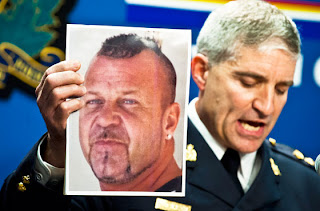 Brian Oldham, the sergeant-at-arms for the Kelowna Hells Angels has turned himself in at the Burnaby RCMP detachment Tuesday after a Canada-wide warrant was issued for his arrest following David Giles' arrest. Oldham has been charged with possession of a controlled substance for the purpose of trafficking.

The charges follow a 21-month investigation into allegations that marijuana grown in B.C.'s southeast was being sold in B.C. and elsewhere to fund the import of cocaine to Canada. The investigation "benefited from contributions" from Mounties in the Okanagan, as well as from U.S. law enforcement, Mexican federal police and Panamanian authorities.