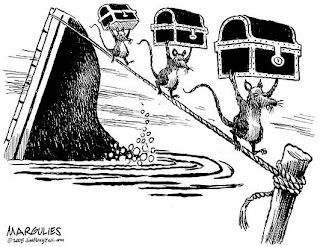 Front page of today’s Vancouver Province was about more Liberal MLAs leaving a sinking ship. A guy at work sees the headline in the lunchroom and says to me, hey, you’re up on politics. Why are all the MLAs resigning? I just laughed and said rats leaving a sinking ship. Haven’t you seen the polls? He shook his head and said no. They know they’re not going to get re elected so they’re jumping ship. Also because that one MLA who crossed over is brining the BC Rail case back to court and they’re all running for cover.

Today’s news is about Kevin Falcon quitting. That’s interesting. He runs for the leadership of the party, loses, then quits politics. Why do I find that suspicious? He better not be planning on going over to the Provincial Conservatives. That guy is a Gordon Campbell clone and is part of the problem. We can’t have him poison a good thing. The last thing we need is for Gordon Campbell’s rats to infest John Cummings new hope.

Breaking news is George Abbott, Mary McNeil and John Les have just added their names to the list. I have two points to make. John van Dongen and Dave Hayer are good men. John van Dongen was a good AG. He crossed over to join John Cummings conservatives and started legal action about BC Rail. He’s solid. Dave Hayer is less confrontational and simply announced he’s not going to run for re election. He’s finishing his term that he was elected to. Dave Hayer is a good man. His father was a reporter who was murdered for reporting about the Air India bombing.

The other point I’d like to make is that this current mess is not Christy Clark’s fault. She was those rats best chance to resurrect the party after Gordon Campbell drove it to drink. We can’t blame Gordon Campbell’s mess on Christy Clark any more than we can blame Brian Mulroney’s mess on Kim Campbell. The nose dive in the polls is a natural consequence of cruel arrogance the whole party has displayed.

Meanwhile Christy Clark is in the news as Geoffrey Cowper, chair of a review of the justice system, released his report claiming that it was time for "systemic and wide-ranging change." The report claims the B.C. criminal legal system needs a major overhaul, five more provincial judges to reduce case backlogs, and a radical new management system. A new management system. I’m not sure what that means but if it means making BC Judges publically accountable then I’m all for it. That is long over due. Peter Leask should be hanged and Anne McKenzie should be fired.