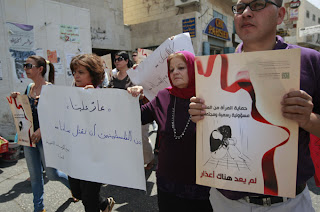 Last Thursday there was a small article in the Vancouver Province about a Palestinian who slit his wife’s throat in public after she filed for a divorce for abuse. A West Bank counselor claimed the wife was regularly beaten by her husband and sometimes hospitalized. This public murder has prompted angry accusations that the Palestinian police and courts ignore violence against women.

However, Palestinians are fighting back and held a public protest in response to the murder. 13 cases of woman killed by their husbands or fathers in Palestine in 2011 and 11 cases already in 2012 have prompted a public outcry for reform. This tragedy took place in Bethlehem of all places which is just south of Jerusalem.

This whole concept of “honour killing” is very disturbing. Some of those cases involved accusations of adultery. Anybody can make an accusation like that after they have murdered someone to justify the murder. How often do you hear of men getting stoned for adultery? Not very often. They don’t commit adultery all by themselves. The whole issue of ongoing violence against anyone especially women is concerning.

It appears Mitt Romney has been putting his foot in his mouth lately in Israel as well as England. In contrast, Hamass in Gaza stuck both feet in their mouth recently. They criticized a Palestinian official for visiting a memorial at the Nazi death camp of Auschwitz and paying respects to its 1.5 million victims there, most of them Jews. Hamas official Fawzi Barhoum, expressing the Islamic militant group’s position, claimed that the Holocaust “is a big lie.”

That is not only ridiculous, it is incredibly offensive. I don’t think people should go to jail for denying the holocaust but I do think they should have a mental health exam. They are either delusional or liars. The holocaust did happen. Calling it a lie is absurd. It doesn’t help the credibility of your campaign at all.

I’m not saying Israel is always right because historically that is simply not true. I’m saying making ridiculously offensive statements like that loses international support for whatever injustices Israel may in fact be perpetuating in Israel. I don’t support forced eviction of Palestinians from their homes, but I don’t support that kind of offensive racism either. God bless Ziad al-Bandak.