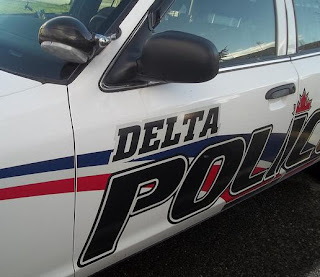 I saw this in the paper and thought it was bizarre. Another cop accused of a sexually related offense. Wonderful. When you say the word sexual assault the first thing that comes to my mind is what do you mean – grabbing an ass or actual rape because there’s a huge difference. Don’t get me wrong, grabbing someone’s ass is totally inappropriate. It’s just very different than rape.

This case involves the accusation that there were multiple sexual assaults. The Vancouver Province is reporting that an outside police investigation found that allegations of corrupt practice, discreditable conduct and neglect of duty against Robert Wesley Johnston had been proven. Johnston has been suspended without pay since March 23, 2011.

Now the officer is being sued by the victim in civil court. The writ claims there were several sexual assaults, one of which Johnston allegedly committed on Jones at a Delta police office on Annacis Island, after arranging to have another officer stand guard outside at the time. Here’s the confusing part. The other officer stood guard while he had consensual sex or committed rape because there is a huge difference. To think that he stood guard while the other officer committed rape is astounding. That would involve more than discipline, it would involve criminal charges.

It all started when the officer responded to a domestic abuse call when he told the victim if the man bothers her again she can call him. It’s hard to imagine any cop would go into a domestic abuse situation and commit rape. It is conceivable he could have become too emotionally involved in the case.

I am most certainly not claiming the victim wanted to be raped. That is the whole problem with our complaint process. I’m just trying to figure out what really happened because these are very serious allegations. A police officer committing rape is serious. A police officer was accused of raping another female officer during the security for the Vancouver Olympics.

The Delta officer was accused of showing another officer a naked picture of the victim on the phone that the victim sent him because he asked her to. He asked her to send him a picture of her naked and she did. OK so what’s up with that? Did he blackmail her into so doing or did she willingly send it to him?

Clearly, the number of inappropriate sexually related activities involving the police lately has revealed the force to be a very unprofessional outfit. That in itself does need to be dealt with. Yet raping someone is off the hook. If that is the case, then criminal charges need to be laid. One has to wonder if she had an affair with the officer and ended up deciding to go back to her abusive boyfriend.

Meanwhile back on the ranch, two Vancouver Police officers are being investigated will face an external investigation into allegations they neglected their duty by failing to warn a Surrey murder victim she was at risk of being killed.

On Nov. 22, 2005, 21-year-old Tasha Rosette was discovered by her sister stabbed to death, five days after a confidential informant told police her boyfriend claimed he intended to kill the young woman, who was four months pregnant with his child and had a three-year-old daughter.

Const. Craig Bentley, working with the gang unit at the time, received the tip and told his supervisor Staff Sgt. John Grywinski, but the two decided to continue investigating it before notifying Rosette. I’m not sure why they would delay in issuing the warning. Normally the gang task force is very prompt with that.

This week Frank Bucholtz from the Surrey Leader wrote about how the sentence handed down to former RCMP Cpl. Benjamin Monty Robinson is a disgrace. He’s the cop that was involved with the airport taser incident and then killed a 21 year old motorcyclist a year later in a motor vehicle accident where he had been drinking. He bragged about getting off of a DUI by leaving the scene and taking some shots. He did exactly that and Frank Bucholtsz is right. The sentence he received is a disgrace.