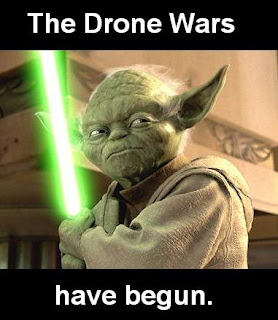 Never mind George Lucas. This is a page right out of George Orwell. Remember how Stephen Harper recently made all those drastic cuts to the military to offset, not pay for, the cost of his fleet of insider trading jets? He cut their pensions, their benefits, their support counseling. He even cut the Coast guard in Vancouver. He even raised the age of everyone’s retirement. Now Harper wants to spend $1 billion to buy a drone army. I kid you not.

Anyone familiar with the Star Wars saga understands not only the dangers of false flag attacks but also the dangers of creating a clone or in this case a drone army. Soldiers have brains and consciences. Drones don’t. Don’t you think it might be a bit of a concern that after creating a drone army, that your enemy will find some kind of radar jamming equipment to steal your drones from you and use them against you?

It’s bad enough we are torturing prisoners without legal representation or a fair trial in CIA black prison sites all over the world. Now we are cutting the red tape and murdering people without a fair trial. That is destroying the Constitution.

Recently we read the headline U.S. drone aircraft strike kills 12 suspected militants. Killed 12 suspected militants. Killed. Suspected. Murder without trial. Who suspected they were “militants” the CIA? The same ones who said they knew Iraq had Weapons of Mass Destruction when they in fact did not. So now, instead of invading a country and inspecting their WMD by force, now we can just kill them without a trial. That is inherently wrong. Gaddafi was executed without a trial. So was bin Laden.

In addition to the concern about extrajudicial murder, we also have the real, problem of operator error and the murder of innocent civilians. This is happening more and more. So what do we do? We increase the use of drone attacks. Under who’s direction? The CIA. After Hilary Clinton apologized for the civilians killed in US drone attacks in Pakistan, the CIA has stepped up drone attacks in North Waziristan in recent weeks.

The CIA are the ones in charge of this drone army we are building for them. The CIA is a criminal organization whose primary source of funding is arms dealing, drug trafficking, money laundering and investment fraud. They have absolutely no public accountability. We want to build them a drone army? Are we on crack? Can we not see how insane this really is?

Meanwhile back on the ranch, a plan to transform a remote south-eastern Alberta community into a world centre for testing commercial drone aircraft is getting off the ground. The plan is to use the restricted civilian airspace zone as a selling point this November at the Unmanned Systems Canada convention in Ottawa, where corporations from around the world will be gathering to talk drones.

Corporations from around the world will gather to talk about drones. Gee, how many drones does this corporation want to buy to protect it’s corporate interest? This is what the drone wars are really about: Harpers Corporate Communism. It’s time Canada found a conservative party. Harper is very much on the wrong road. Creating a drone army in not the way to go.

This is refuse the cruise times a thousand. A private corporation is mandated to make a profit. Making and selling drones for profit removes any public accountability or any moral variables. Since Blackwater has been relocated and renamed to Xe and is still a mercenary army utilized by the agency, how many drone armies to we want to build for them to sell to the highest bidder?

Harper says he wants them to protect the arctic. No he doesn’t He wanted them after the invasion of Libya. He’s just using that as an excuse because Col. Paul Maillet, an aerospace engineer, said Harpers pal’s F-35 does not meet the needs of the government's First Defense Strategy, a key pillar of which is Arctic sovereignty.

"How do you get a single engine, low-range, low-payload, low-maneuverability aircraft that is being optimized for close air support to operate effectively in the North?" he asked. Maillet called the F-35 a "serious strategic mismatch" to Canada's military needs, and suggested the Royal Canadian Air Force would be better off purchasing a fleet of F-18 E/F fighters.

Committing to purchase a plane that is still in development is financially perilous, Maillet said, adding that the planes are likely to cost much more than $25 billion. Maillet said a competitive bidding process was never held - the decision coming from an "old boys' club of air force generals and politicians."