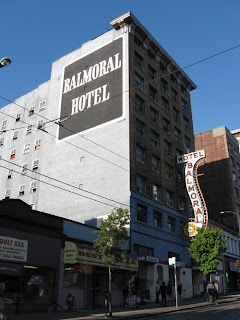 Two arrests were made at the infamous Balmoral Hotel dive in Vancouver’s Downtown Eastside after VPD raided a drug lab. The Vancouver Province is reporting that people are under the impression it was a meth lab and that everyone could smell the chemicals from across the street.

We know the last set of meth labs the OMGU raided before last Christmas were run by bikers which in BC means the Hells Angels. We know that the Hells Angels had a large meth lab in Kelowna a while back which was a major production point for the Okanagan.

We know that Greg Domley, the president of the Salem Hells Angels who was also the East coast president has been incarcerated for trafficking meth in Massachusetts. The Hells Angels were bringing crystal meth from California to Massachusetts. So I wonder who was ultimately running the meth lab in the Balmoral? Crystal meth is a very damaging drug. It’s made with Drano and several other highly toxic chemicals and really messes you up.