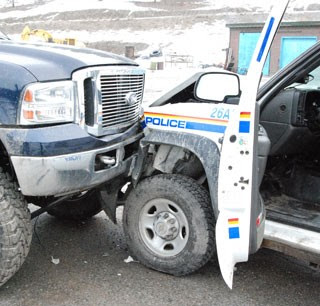 OK time to start catching up on gang news. A high speed police chase in Kelowna is in the news. A car refused to pull over for the police in West Kelowna and led them through a high speed car chase to Vernon switching vehicles and firing at police along the way. Someone with a police scanner posted a play by play on Castanet. Reports came in that a woman travelling with the group was injured and had to be taken to the hospital which prompted an investigation from the New Westminster police force.

First of all, before the New Westminster police force investigates anything, they need a new use of force trainer. The last guy that got drunk, robbed and beat a newspaper man in Vancouver while shouting racial slurs is a disgrace to Canada. The fact that he’s still a trainer means the police don’t give a rats ass about the public’s opinion or the country’s democratic will.

I did see a youtube video of a high speed police chase in the states where a car led the police through a very dangerous high speed chase ramming police cars and causing mayhem. As soon as the car came to a crashing halt, the police dove on the suspect and gave him the boots. However, that doesn’t seem to be the case here. The police fired upon the vehicle and it was confirmed that the woman was shot.

The bizarre thing is Michael Edward Ellis did the exact same thing in 2009 and a judge dropped the charges in 2011. That is what needs to be addressed. In 2009 Ellis led police on a high speed car chance and intentionally rammed a police vehicle with a stolen pick up truck. Nearly half a pound of crystal meth was found in the truck and the judge dropped that case. There’s another judge that should be hanged.

Ellis spent 31 months in jail waiting trial and the judge dropped it saying his right to a speedy trial was violated. I’m not going to argue that was not a long wait. I’m going to argue that wait didn’t outweigh the seriousness of the charges against him. Compare that to the delay in Joey Verma’s trial. After a three year delay the judge postponed the actual trial for another year. That is criminal. It was the court that made the delay not the prosecution. The court is liable not the crown.

If Joey Verma’s trial gets dropped because the judge created those excessive delays then the judge should be charged with accessory to murder. Let’s watch what happens to the new charges against Ellis. Half a pound of Kelowna crystal meth. I wonder who that was for.