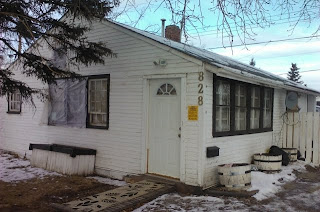 Ryan Randolph Holden shot rival drug dealer, Kelly Roney, 60, outside a Dawson Creek pub June 2007. He was sentenced to 10 years in prison for manslaughter. Back then we still had the two for one pretrial credit for time served. He served four years before his sentence and got double time credit for those four years. So ten years less eight years made two left to serve for murder. That was insane. So really he received a six year sentence for murder. He appealed that offensive sentence and the appeal was denied.

Here’s the thing: The Vancouver Province is reporting that Holden worked for the Maple Ridge Hells Angels selling drugs for them in Dawson Creek. It gets a bit messy because the rival drug dealer he killed also worked for the Hells Angles. We’re not sure if it was the same chapter. The key thing here is that the Haney Hells Angels, they are the ones in Maple ridge, have been implicated in the Dawson Creek drug trade. That would be Spikes chapter. The one he took over after Ernie Ozolins was murdered.

Of course Ricky Ciarniello, the fat ass liar, denies either drug dealers were associates of the Hells angles. I suppose he denies Jonathon Bacon was a Hells angels associate too. Or the Renegades, the Crew, the GTS or the Independent Soldiers just like he denied the Jesters were affiliated with the Hells angels even though Vinnie toothless was caught with papers saying they were. Some things will never change.

We figured out how to tell when Ricky fat ass is lying. His lips are moving. That guy has to be from weird Hal’s chapter. He wouldn’t make it in East Van. I can’t believe they call him their spokesperson. That’s pretty revolting alright. He was even panhandling at Sturgis North selling his support your local crack dealer shirts. Get a job.