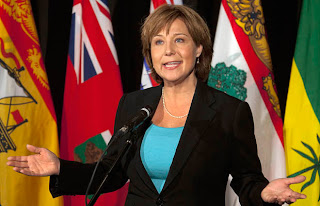 Diane Watts and Christy Clark are both in the news defiantly defending their expenses. Recently the media reported that after Dianne Watts said policing for the George Bush and Bill Clinton Investment Fraud Summit wouldn’t cost taxpayers anything, it was reported that policing alone cost $45,000 and that speaker fees cost $300,000.

$300,000 for such high profile speakers is not surprising to me. What is surprising is the claim they raised that money solely from ticket sales. The Surrey Leader reported the cost break down to be $324,000 spent bringing former U.S. presidents Bill Clinton ($102,453) and George Bush ($221,847) to Surrey’s Regional Economic Summit, but those costs were recouped through ticket sales.

So $324,00 dived by $600 a plate makes 540 paying guests. Did they have 540 paying guests? I don’t know. Perhaps. I doubt Dianne Watts, Christy Clark or Kevin Falcon paid that. I’m not sure how many other free tickets they handed out. Yet the whole concern is that Bill Clinton was deeply involved in money laundering out of Mena, AK that helped crash the BCCI. The Bush family have a long history of being directly involved with investment fraud. Paying those clowns that much money to speak at an economic summit was an offense to the residents of Surrey.

George Bush vetoed the bill to stop torture. That makes him a war criminal. End of discussion. Inviting him here to speak in Surrey was a slap in the face of all of us. A lot of people have a hate for Dianne Watts now. Like Martin Luther King, I’ve seen too much hate, to want to hate and every time I see it I say to myself that hate is too great a burden to bear. Yet when I look at what Dianne Watts has done, I feel sad and hurt. We had hoped for something very different.

Sure Dianne is a lot smarter than Christy but the hidden agenda is very concerning. Ross Buchanan has brought a few serious concerns to the public’s attention yet most of the public don’t have a clue about these concerns. Like the garbage incineration plant and that conflict of interest development corporation that is public but accounts are secret.

My main concern is finances. Huge expenses. The Surrey Leader reported that Surrey council and staff expenses have increased. Then we have this smug attitude that this is the cost of doing business. That’s what Christy says. It just reminds me of a youtube video the Georgia Straight took of Christy Clark inside the George Bush Summit in Surrey. She just had that airhead ear to ear grin while she refused to give them an interview.

It makes me wonder why Dianne Watts is so comfortable with people like Christy Clark and Gordon Campbell. It’s the smugness that saddens me. It’s not what I envision for Canada let alone Surrey. What I envision for Canada is people like General Romeo Dallaire: humble, passionate and filled with compassion. That’s a real soldier. The guy who gives his all, not the guy who robs from the poor and the elderly to give to the rich the laughs about it.

Christy Clark recently took some more heat for her defiant and smug attitude about her Gordon Campbell like expenses. Understandably so. I will admit that I agree with her pulling the plug on Enbridge if she does in fact walk the walk. I will also agree that her position on Enbridge, although it’s supported by the public, isn’t enough to save her or her political party. Yet I will point out one thing. Christy Clark was their best attempt at spin to resurrect Gordon Campbell’s defiant arrogance.

Pulling the plug on Enbridge is the right thing to do. Gordon Campbell would simply defiantly rage forward against public opinion just to screw the public one more time while he had the power to do so. Then spend millions on advertizing trying to convince us it was the right thing to do. Christy Clark may not have been enough to hide or spin Gordon Campbell’s heartless arrogance, yet she is better than Gordon Campbell. I will say that much. It’s sadly unfortunate that the rest of her political party are not. Except for Dave Hayer. He was a good man but he’s not running again.

More gang news on the way. I just had to get the last two posts off my chest first.