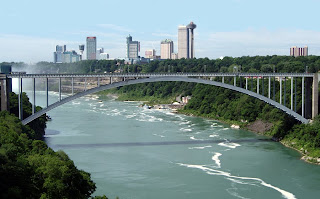 Sympatico news is reporting that Niagara Regional Police announced a female torso was recovered from the river in Niagara Falls, near the Rainbow Bridge border crossing. Investigators said the discovery was not related to the ongoing investigation into the death of Hua Guang Liu, whose body parts were discovered in two Toronto-area parks in recent weeks.

Police said passersby spotted the floating torso on Wednesday and alerted officers. Police have not recovered any limbs or the woman's head. Niagara police said an autopsy suggests it belongs to a middle-aged Caucasian woman, who was the victim of homicide. Tragic.

We know the Niagara Hells Angels were intensely involved in the drug trade there. I wonder if this homicide is drug related. Hua Guang Liu's estranged boyfriend, has been charged with second-degree murder in that case. She was a mother of three starting her own business. Very sad.