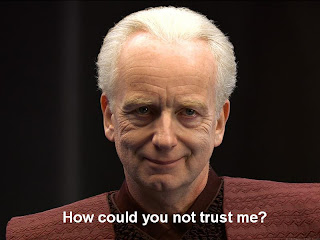 Today’s absurdity comes right out of the horse’s mouth. Well one end at least. Stephen Harper claims Politics won’t sway pipeline fate. What he really means is democracy won’t. Politics is the problem. The Reform party talked about giving MP’s free votes and encouraging MPs to poll their electorate and vote on issues how their constituents want them to vote. What a fairytale that would be. Stephen Harper has gone as far away from this principle as physically possible.

Stephan Harper adapts the adage, Big Brother knows best. We decide then we spend your tax dollars on advertizing brainwashing you into believing we were right. Case in point, HST commercials. Attack adds when there isn’t even an election on. Attack adds against the Liberals after they were wiped off the face of the earth in the last election. Robocalls tricking people not to vote has nothing to do with democracy and polling the electorate. It is fraud.

As soon as BC gets vocal enough on the Northern Pipeline scandal that even Christy Clark starts to express concerns, Stephen Harper changes the rules and says BC has no say. He and his cabinet does. Then he has the arrogant audacity to claim politics won’t sway the pipeline. Science will decide. That is a bold faced lie. Money will decide not science. And it’s not money for the country it’s money in the pockets of corporate executives who contribute to his political campaign.

"Here's a government that has gutted the environmental assessment process and the [National Energy Board] process, so that politics trump science, trying to tell British Columbians that well, in fact, science will play a bigger role than politics. It's clearly not the case," Peter Julian.

Clearly it’s not in Michigan or Wisconsin’s best interest when we see the ongoing environmental impact from an ongoing problem of Enbridge pipeline leaks resulting from long term bad maintenance and bad safety standards. When we deregulate the banks, criminals commit investment fraud and rob it. When we deregulate the oil industry, criminals take short cuts on safety and maintenance to save money and make more profit at the expense of the environment and the public. Not just the general public but other business ventures as well.

Giving the profits from our oil to a Huston Based company doesn’t economically benefit Canada. Letting our oil industry be bought out by Communist China is even more as absurd. If the oil industry was nationalized in Canada like it is in Mexico, then Canada would receive some benefit from a pipeline. Yet it’s not. We give those criminals a monopoly to regularly raise the price of gas at the pump as much as they want. There is no free market here. It’s a monopoly. Our tax dollars are feeding that monopoly so the elites can get obscenely rich at the expense of the taxpayer. Stephen Harper likes to do a lot of name calling but mirror mirror on the wall, who’s biggest flaiming Communist of them all? Stephen Harper is. Don’t you forget it.

The Vancouver Province ran this editorial cartoon on August 9 2012. 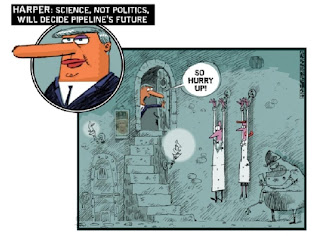 This week the Surrey Leader ran a Raeside cartoon about a leaky oil pipline with Christy Clark saying the royalty cheque is in. Clearly I'm not the only one concerned about Harper's abandonment of democracy in the BC decision.