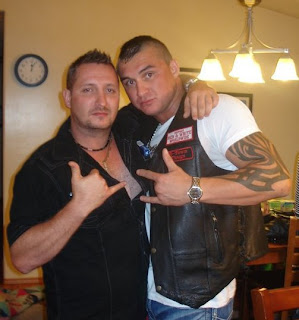 Speaking of the Hells Angels drug trade, let’s take a look at Brandon, Manitoba. Billy Bowden's from Brandon. They killed his friend from LHS and told him to suck it up or be a target so they could give the Thompson drug trade to the Ontario village idiots. That's what set the gang war off in Winnipeg.

Well here’s a picture of two locals from Brandon. Tyler Cairns and Ron Hather. Ron is the one on the right in the support vest that says B-Town Thugs. He was charged with trafficking cocaine back in 2008 along with several others.

Interesting to note that on July 6 2012 a suspect was taken into custody regarding the Canada Day shooting in Brandon. The guy riding with him car was caught with a gram of crack and heroin. He was released on a promise to appear.

Two grow ops worth $1.3 grow op were recently busted in Western, Manitoba. There appears to be a local shake down on the drug trade and people of interest are MIA.