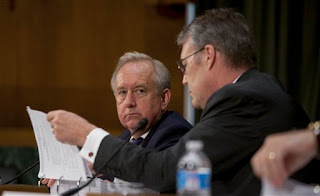 Here’s an interesting progression. A blog reader just sent me a link to an article about Standard Chartered being accused of money laundering in Iran. Seemingly they made millions off transactions in the billions. But wait, when we hear the term money laundering, we instantly think of laundering drug money. Yet that doesn’t seem to be what this is about. It appears this is about doing business with Iran which was legal prior to November 2008 when the Treasury Department banned them because the US put sanctions on Iran.

Over the last couple of weeks, global banks have fallen under the scrutiny of regulators, particularly given their overseas operations. In mid-July, HSBC was accused by a Congressional subcommittee of having lax anti-money laundering policies, which ultimately exposed the U.S. financial system to “a wide array of money laundering, drug trafficking, and terrorist financing.”

Now we’re getting to the interesting part. HSBC’s involvement with laundering drug money. A US Senate committee report claims that Mexican drug cartels laundered millions through HSBC. Well. At least they said sorry.

Don’t worry, we haven’t forgotten about the Vatican bank. The interesting thing is that the Vatican Bank isn’t the only one tied to intelligence agencies. So is the HSBC. It’s a good read so it is. It reminds us of the BCCI.