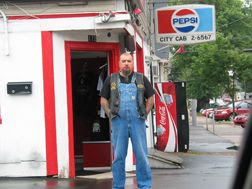 We heard about how the president of Bacchus in Saint John recently shot up the whole neighborhood and murdered a guy he had beef with because he couldn’t take him in a fight. Well, now the media is reporting that Bacchus are expanding into P.E.I. as well as Dartmouth.

Some say the new report is a joke because these clowns were already there, they’ve just changed their name again. Others are concerned about the increase in drug trafficking that is destroying the MC movement out east.

The Hells Angel friendly Charlottetown Harley Club has been in PEI for 35 years. It’s a newer small group called Cerberus that started in PEI in 2009 that are patching over to become Bacchus. Just add water, bring to a boil and ready in five minutes. Instant puppets.

We’ve already talked about Jason Yeo and Brandy King who were involved in a large drug bust in PEI. They obviously wasn’t wearing a Hells angels patch but it’s hard to conceive that they were trafficking that much drugs without the Hells Angels permission.

In 2005 a Charlottetown drug ring connected to Halifax was busted. The drugs involved were cocaine, ecstasy, cannabis and prescription drugs. One of the people arrested was Derreck Dean Huggan, a man police say is a member of the Bacchus Motorcycle gang located in New Brunswick. Huggan ran the Route 81 shop in Charlottetown. Route 81 was obviously a Hells Angels support shop.

Back in 2000 Derek Dean Huggan was caught with $85 thousand worth of crack cocaine, marijuana, and hashish as well as a loaded handgun. In 2007 Derreck Dean Huggan was described as a drug kingpin and was sentenced to 6 1/2 years for conspiracy to traffic in cocaine.

In 2006 James Robert Long, one of Huggan’s pals tied to the Route 81 shop for the Hells angles was sentenced to five years after pleading guilty to trafficking cocaine and hydromorphone, a prescription pain killer. Hydromorphone must be similar to oxycontin.

Ryan MacKinnon was caught selling crack for Huggans in PEI who upon appeal got 18 months served conditionally in the community. That isn’t even house arrest. Bizarre. He was ordered to perform 100 hours of community service but was allowed to pay $7 an hour for service he couldn’t be bothered to do.

This article claims while based in New Brunswick, the Bacchus brown nosers expanded to P.E.I. about the same time the Route 81 store opened.

There was ultimately a suspicious fire in the Route 81 support store after it became Tombstone Tattoos. The weekend before the fire police arrested Donald Gregg Gautreau there for threatening to kill a Charlottetown woman, as well as kicking in the back door to her home. He was released before the fire after promising not to contact the alleged victim or her daughter. Nice guys. I know I don’t support any of that.

Not only was Route 81 tied to the Bacchus and Hells Angels drug ring brining drugs from Halifax to Charlottetown, PEI, but two of the drug dealing associates murdered Stephen Peebles. Powers and Smith promised to sell Peebles some cheap heroin and hacked him up with a meat cleaver.