Extortion: Money for Nothing 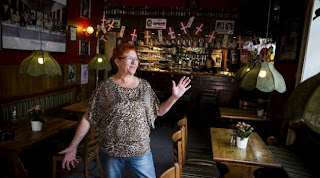 In Denmark, there has been a series of articles in the news about gangs committing extortion. One story in particular involves a 67 year old woman being targeted. That’s pretty low. Several taverns in Copenhagen were being charged protection money. Jane Pedersen, the 67 year old owner of the Café Viking refused. The good news is that with the added media attention, the gangs seem to have backed off a bit. Bullies don’t want exposure.

Michael Green from TBM talked about extortion in the news and pointed out that you really don’t get anything for your money. Just like that old Dire Straights song, Money for Nothing. I have to agree. As much as I am opposed to selling crack, at least drug dealers are selling a product. Extortion is indeed money for nothing. Pay us this money or you might have an accident. That’s just as bad as selling crack.

I hear it is common in Montreal and they call it Pizzo. Well, I’m not from Montreal, I’m from Vancouver and the only Pizza I know about is the kind that comes with pepperoni and cheese. Extortion is what parasites do. They live off others and suck them dry.

Another form of extortion is insane interest on loans. One gambler in Montreal borrowed $20,000 and repayed $15,000 within seven months. He was told that was just the interest and was beaten with a hammer when he started making more payments. That wasn’t the Italians in was the Irish (West end gang).