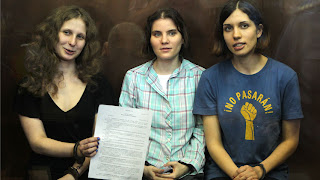 On the international scene, Russia slips back into the Dark Age after three members of a Russian punk rock band were sentenced to two years in prison after speaking out against Vladimir Putin. They were charged with hooliganism and religious hatred. I don’t know how a punk rock band got permission to play in a Russian cathedral but free speech is essential in any democratic society.

Lately there have been many protests in Russia against Vladimir Putin accusing him of voter fraud. Singing a "punk prayer" pleading with the Virgin Mary to save Russia from Vladimir Putin is not promoting religious hatred. Tyranny is. My only caution to my comrades in Russia is when they call for a revolution, be careful where that leads. You need a constitution guaranteeing democracy and free speech, not a Manifesto abolishing it. 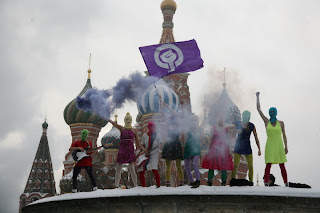 Update: OK I’m going to have to weigh in here. I guess things aren’t always what they appear. Storming a church and holding a punk rock concert in it without permission is disrespectful. Many find punk rock disrespectful at the best of times. The lyrics in their red square performance were off the hook. Disrespectful is their mission statement. To highjack a church and force people there to listen to that is wrong.

When I look at the antics of Pussy Riot, I have to say I don’t support them. Even the name pussy riot is offensive. What are you trying to do bring back Caligula and have that kind of a riot? Standing anywhere and screaming let’s have a riot is in itself problematic. Why do you want to a have a riot? There are laws framed against the instigation of a riot which would include vandalism and looting.

Free speech is a sacred right. Yet that doesn’t mean we have the right to prevent others from having their free speech or in this case worshiping who, how or what they may. Perhaps the reason Pussy Riot stormed a church is because when they performed in Red Square no one came to listen to them.

I saw this post in another forum and wanted to copy it before it was lost:

"Would you believe that Pussy Riot would be allowed to sing an anti-Putin song in the Red Square and get away with it? In fact, that's what they did on 20th January 2012. On the Red Square in broad daylight they played a nicely rousing song about 'KGB bitches' and 'Putin who is pissing his pants', and there was press around to take photos and video: http://pussy-riot.livejournal.com.nyud.net/8459.html and http://www.youtube.com/watch?v=yqcmldeC7Ec

After that Red Square performance they were briefly detained by the police and then released. No trial, no conviction, no world outrage... nothing. So, next time their organizers have chosen another venue to make sure there would be headlines "Jailed for singing an anti-Putin song"... That's how public opinion is manufactured."