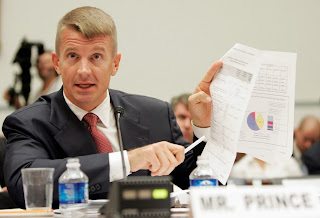 Today the Vancouver Province is reporting that Training Canadians costly for Blackwater. Guess what. Blackwater is still training Canadian soldiers. In 2011 $2.4 million Canadian tax dollars were spent on mercenary training at the privatized military institution with a very bad reputation. So bad they had to change their name. Three times.

First it was Blackwater. They acquired a very bad reputation in Iraq and Afghanistan for killing civilians as well as arms dealing. They claimed that because they were military the civil or criminal courts couldn’t touch them for war crimes. At the same time they argued that since they were civilians, the military could not discipline them either. After the founder, Eric Prince was accused of murdering whistleblowers he changed the name of the company to Xe and moved to the United Arab Emirates. Now he's still operating under another name and still sucking up Canadian tax dollars. That is criminal.