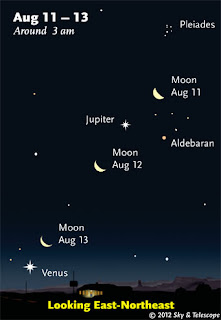 I knew there was a meteor shower last night but I didn’t realize there was another planetary alignment. I was up before sunrise this morning and saw two bright starts lined up on either side of the crescent moon which appeared to be lining up with where the sun was preparing to rise. With an orange horizon above the mountains, it was a pretty awesome sight.

It reminded me of the night a few months ago when Venus was supposed to be lining up with one of the planets. We’re sitting on top of Holyburn ridge watching the sun set. I’m like, Venus is easy to find because it’s the first star you see on the horizon right above the setting or rising sun. Only that night we didn’t see it. We saw something a bit further up in the sky aligned with the moon.

People get all freaked out with the Planetary alignment that some speculate coordinates with the Mayan calendar at the end of the year but planetary alignments happen all the time and the sky doesn’t fall. It is cool to see though. 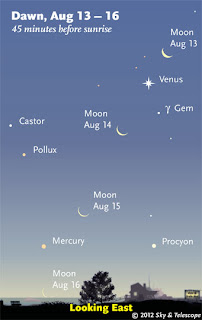 Posted by Dennis Watson at 1:28 PM