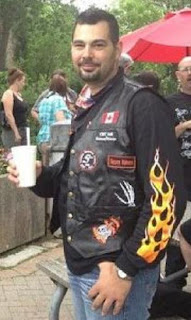 Here’s a guy I hesitate to even mention, Dominico Esposito. He’s in a different league than Pat James entirely. He has a lot of respect on the street and I have to admit I have a lot more respect for him than most of the other clowns out there. He doesn’t ride a fully dressed Harley that looks like a goldwing. He rebuilt a rigid frame from ground up. Ya gotta respect that.

He doesn’t have facial tattoos and he doesn’t brag about bad ink. He’s quiet, polite and respectful yet they say it’s the quiet ones you have to watch out for. He has past history in Montreal and New York. He’s not one to cross and he gets the job done. Selling drugs in clubs is different than selling crack on the corner. The guy even overcame cancer. There’s a lot there to respect.

I will tell you something about the Hells Angels. They are not honest. They are not trustworthy. They play both sides until the opportunity arises to stab a brother in the back to promote their own financial gain. We’ll talk about Mom Boucher’s past history as well as their support for the Violis.