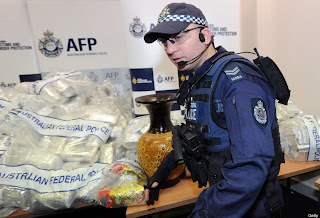 Australian police have seized 306 kilograms of crystal methamphetamine and 252 kilograms of heroin that was smuggled into the country in a shipment of terracotta pots. Australian Federal Police say four Hong Kong nationals and three Australians were arrested in Sydney on Monday. Each faces a potential life sentence if convicted on drug charges. The U.S. Drug Enforcement Administration alerted Australian authorities to the plot last August. Police will not say where the drugs came from. Very strange that the police won’t say where the drugs were coming in from.