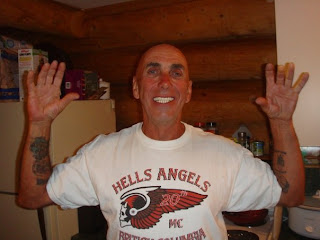 Now that made my day. David Giles and three co-accused, Kevin Van Kalkeren, James Howard and Michael Read, have each been charged with cocaine trafficking and conspiracy to traffic in cocaine. Castanet has a video clip of the Press conference. That is the crown jewel of the 2012 Kelowna Summer Jam. Word. No matter how the race is run it always ends the same. Another room without a view waits downtown. Just about the time you're thinkin' it's alright, Breakdown, takedown, you're BUSTED.

Police seized $4 million in cash, firearms and eight kilograms of cocaine from several locations including a hidden compartment in a vehicle. Giles was taken into custody at the Grand Villa Casino and Hotel in Burnaby over the weekend. Also facing charges is Brian Oldham, a Hells Angels sergeant-at-arms in Kelowna. He remains at large and a Canada-wide warrant has been issued for his arrest.

“These groups show a complete disregard for Canadian families, and public safety,” says Superintendent Brian Cantera of the RCMP Drug Enforcement Branch in B.C. Very true. They don’t care who gets killed or who gets tortured as long as they get rich at someone else’s expense. Well done officers. Thank you. 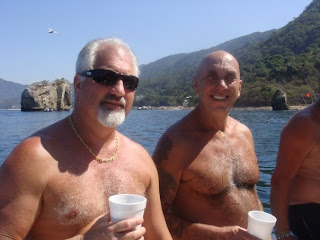 The Vancouver Sun is reporting that Giles was in court today wearing a black t-shirt with a skull on it. Skeletor was wearing a skull shirt. Go figure. I hear Pat James is starting a Free David Giles facebook group just like they did for Matt Foley. I hear these are the new support shirts they’re selling to raise money for Giles’ legal fees. Or should I say bibs.

We need to talk about the social awakening that has resulted in the shattering of two misconceptions that this drug bust represents. First is the ridiculous claim that the Hells Angels aren’t criminals, they’re just a bunch of motorcycle enthusiasts. People here can’t even quote that with a straight face. Everyone here knows that is absurd. All these drug convictions speak for themselves.

Freddy just posted a link to a court challenge in the US where the Hells Angels are appealing their criminal organization status there. Well, they’ve already done that in Canada and lost. The long list of drug convictions shows that is their primary business. The freedom of association means we are free to join a religious or political party of our choosing. It does not mean we are free to engage in organized crime. We know why they are appealing their criminal organization status. They don’t want their proceeds of crime seized by the police.

Sad to think they were ready to kill John Punko just because he might lose his criminal org appeal. To think they would pull a Juel Stanton just to postpone their criminal org status in BC. That really is pathetic. It would be ironic indeed if it was David Giles who became the first Hells Angels criminal organization conviction in BC. I wonder if they’ll shoot him right before the verdict just to avoid that decision.

The next shattered misconception this drug bust represents is the ridiculous claim that rating out a crack dealer is being a rat. That is insane. Crack dealers are rats. Failing to report them is being a rat. The people who murdered Britney Irving and Geoff Meisner are the real rats. Reporting those murderers to the police isn’t being a rat. Failing to do so is. People understand that now. As a result, these two shattered misconceptions means our new social awakening will no doubt bring us into a new era where crime is not cool any more.

Crack and Crystal meth are very addictive and very damaging drugs. The organized criminals who make an obscene amount of money from flooding our streets and small towns with that kind of invasive poison need to be restrained. Ratting out a rat makes this world a better place.