Pope Francis from Argentina is the new Pope 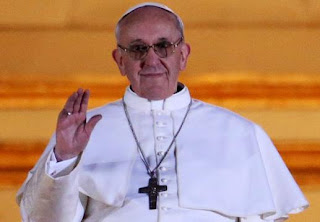 CBC is reporting that Cardinal Jorge Mario Bergoglio of Argentina, who will be known as Pope Francis, has been selected as the new Pope. He is the first Pope from the Americas and the first from outside Europe in more than a millennium.

That’s nice. Everyone is stunned because everyone was speculating as to who was the most likely to be chosen. I guess that’s why people shouldn’t assume who’s next in line. On a lighter note, there was a late night comedian on television a week ago that sent a reporter out into the public to ask them what they thought of the new Pope. This was long before one was selected. They all started making stuff up and saying oh, he’s great.

Then the reporter asked one guy if he had seen the Pope’s ex wife’s interview on television and the guy said, oh yeah, she was very funny. Then she asked him how he felt about him being Jewish and he said he felt that was a good thing. It was rather amusing to see how people can be so out of touch with reality. I know we’re all busy but come on... Is the Pope Catholic?