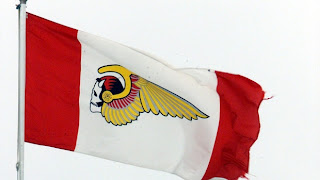 Charges against the more than 150 accused included murder, gangsterism, drug trafficking and conspiracy. Some have pleaded guilty while others - as many as 100 - are still awaiting trial. The 31 who were released were not facing murder charges but were looking at charges of gangsterism and drug trafficking.

150 people were arrested in 2009. In Quebec the police don’t play around. They freakin arrest everyone. The right to a speedy trial is important. Thus they are reviewing the processing of mega trials in Quebec. Our court system in BC is in much worse shape.

I will comment on this ridiculous flag they had flying before the arrest. I thought it was a Photoshop joke. These idiots actually had that flying over their clubhouse. Not very bright. Yeah they’re gonna take over the country alright. The only territory they’re going to end up with is in prison with the big house crew. Pride cometh before the fall. Word.