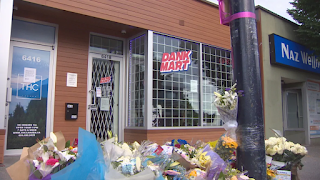 CTV is reporting that "A Vancouver entrepreneur gunned down behind one of the businesses he co-owned is being remembered by friends as a kind-hearted man who gave back to his community. Authorities said 30-year-old Amin Shahin Shakur was shot near Main Street and East 48th Avenue at about 11 p.m Monday night and died at the scene. He did not have a recent or extensive history with police, according to a Vancouver Police Department spokesperson.

"Shakur and Spensir Sangara were co-owners of THC Canada and Dank Mart convenience store." Dank Mart beside a THC store. Like that's not suspicious. Dank Energy drink is a hemp infused beverage they sold out of Tbarz. Randy Jones is listed as the President on Linkedin. We all know the Walrus. He's with the Surrey Girls now. I sure hope this murder wasn't a copyright dispute with a rival. No extradition for the Walrus. Just for his rivals. Randy owns Shakerz.

Amin was gunned down the day after they uploaded their third YouTube video.

We are now forced us to ask ourselves, has gun violence entered the legal pot industry?

East Van isn't Randy Jones' jurisdiction. That would be Bryce and Rainbow Ricky.