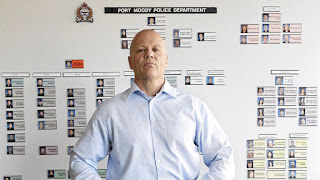 The Vancouver sun is reporting that "Port Moody police has released details about an arrest last month a 50-year-old woman and the seizure of more than $800,000 worth of drugs, cash and weapons from two properties in the Tri-Cities. Police seized 110 pounds of dried cannabis and other cannabis products, such as edibles, with a combined value that police estimated at $390,000. Also seized was $420,000 in cash, three firearms, ammunition and five vehicles."

Pot's legal now and former Port Moody Police officer Andy Richards has teamed up to sell cop pot. So the Port Moody police seize a whole bunch of pot from Andy's rival. Now that is conflicted.

Posted by Dennis Watson at 3:18 AM