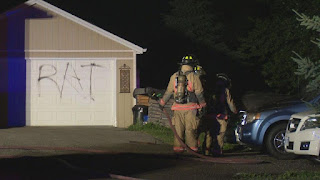 The Toronto Star is reporting that "Someone has painted the word “rat” on the garage door of a Hamilton man who was considered family to killed mobster Pasquale (Pat) Musitano. Two cars were also torched around 2:30 a.m. Friday morning in the driveway of the home on Miles Road, between Rymal Road East and Twenty Road East. The vandalism comes a week after Musitano, 52, was shot to death in a Burlington parking lot. The murder remains unsolved."

"The home belongs to the family of Giuseppe Carmelo (Pino) Avignone, 59, who for decades was considered a loyal member of the Musitano crime family of Hamilton. He is one of the two men who met with Musitano at the time of his murder last week."

I am by no means an expert on the mob in the hammer IE Hamilton. All I know is that the Calabrians who warred with the Rizutos in Montreal were from Hamilton. We know that Pat Musitano was recently murdered in Hamilton and he was an associate of the Rizutos. Giuseppe Avignone was Pat Musitano's nephew through his wife's side and was born in Calabria. Giuseppe was an orphan and came to Canada and lived with Pat Musitano when he was 13.

The Toronto Star is reporting that Giuseppe "is one of the two men who met with Musitano at the time of his murder last week." So, was he a rat for betraying Pat, for going to the police after Pat was shot or did the police do this so he would become a rat? Time will tell. It always does.

Posted by Dennis Watson at 1:13 PM