Brandi's reopens Orange No 5 shuts down over COVID 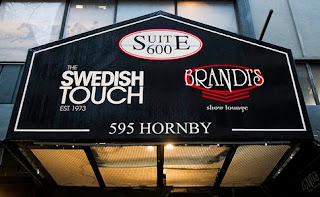 The Vancouver sun is reporting that "One Vancouver strip club is reopening, even as another has been shuttered by health authorities after a repeat customer tested positive for COVID-19. Brandi’s Show Lounge said it plans to open its doors again at 10 p.m. Wednesday with a 'safety first' plan. The reopening comes as another strip club, No. 5 Orange on Main Street, is temporarily shut down." Both strip bars are run by the Hells Angels. 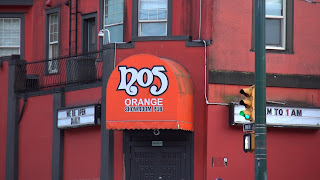 No. 5 Orange is a sh*t hole in the DTES. Stephanie Lange was a stripper from Number 5 Orange whose remains were found on the Pickton Farm. It's somewhat bizarre the BC Government is bending over backwards for the Hells Angels once again. Kinda like how the City of Vancouver bought the Drake from the Hells Angels to turn it into social housing. The city gave the Hells Angels $2 million more than it was worth. Things that make ya go hmmm...

After Robert Pickton took the fall for the Hells Angels, the police refused to investigate Stephanie Lange's murder along with 33 other missing women found on the farm. Dianne Rock was gang raped on that farm. Gang raped would implicate more than one suspect. Robert Pickton was convicted based on the fact that he was not the only suspect or the main suspect, just an active participant. He disposed of the bodies. Wally Oppal shut down the Missing women inquiry as soon as the Hells Angels were mentioned.

Stephanie Lange had a drug debt. That's why the Hells Angels killed her. Brandy committed the mortal sin of opening up a new strip bar after they kicked her out of the one named after her.

After Brandy died, a troll lied to the newspaper and said she was depressed after leaving her club because she was unable to find an investor to open a new one, That was a bold faced lie and the newspaper printed it. Brandy did find an investor and had opened a new club. Business was booming. So much so another troll wrote a review online complaining about the long lines at her new club, the Granville Strip, saying that the strippers were much better at the Number 5 Orange which was the dive run by the Hells Angels. The Granville strip is still closed over COVID.

Brandi's is a strip bar while the Swedish touch is a brothel. The recent closure was more likely for a BC Gang Task Force staff party now that the Garden of Eden has closed down.

I will admit that the Swedish Touch is a lot nicer than the Number 5 Orange but how long will it stay that way? Remember King Midas? Everything he touched turned to gold. In contrast, everything the HAs touch turns to sh*t. Brandy cared about the girls and had them take fitness classes. She cared about their health and well being. The HAs do not. They feed them drugs and cast them aside like an old shoe once the drugs have eaten them alive.

If you spend your entire life swimming around in a toilet, the only thing you're ever going to find is e coli. You need to climb out of the toilet, get some fresh air and see what life in the real world is like. You need to discover the beauty beyond proper sanitation because outside of that sh*t hole, it really is a wonderful world. Don't let life pass you by. Climb out of the toilet and discover it.

"Thy mind, O man! if thou wilt lead a soul unto salvation, must stretch as high as the utmost heavens, and search into and contemplate the darkest abyss, and the broad expanse of eternity."

I saw the depths of hell but I chose not to dwell there because life has more to offer then that. Hell is a state of mind and we can leave it whenever we choose to do so. The choice is yours. Own it.

Posted by Dennis Watson at 2:58 AM