Halifax rally for an inquiry into shootings 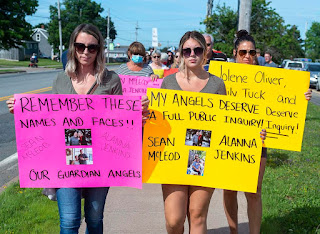 The Niaagra Falls Review is reporting that "People are gathering at a Halifax park today to demand a public inquiry into the Nova Scotia mass shootings. The gathering at Victoria Park comes less than a week after the province unveiled a plan for a panel review into the massacre. Organizers say a 22-minute general strike will begin at noon local time to honour the 22 victims who were killed last April." Wally Oppal's panel discussion was a farce.

There are numerous inconsistencies with the official narrative on this case. Other than gun control, there was no motive. Yet the guns were not legally obtained so gun control would not have prevented it. Any crime that doesn't have a motive is suspicious.

The police tired to claim the mild mannered good Samaritan denturist had ties to organized crime. Then it was reveled that the large lump sum that was deposited into the suspects bank account came from the RCMP. That act cannot be rationalized away.

The fact that the police didn't warn the public that it was a man dressed as a police officer in a police car shooting people not only makes them criminally culpable in the subsequent murders, it implicates them in a cover up. Macleans reported that it had the hallmarks of an under cover operation. I do not believe that Gabriel Wortman was the shooter and I do not believe the Hells Angels gave him the guns. There is something far more sinister at play here.