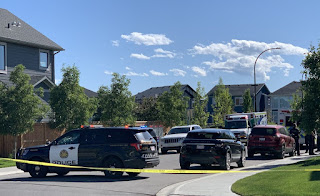 660 News is reporting that "A man is dead after being shot in his vehicle in the community of Legacy in southeast Calgary. Officers received a call around 3:50 p.m. Tuesday to a park near the intersection of Legacy Parade and Legacy Lane S.E. where residents reported that someone had been shot in a vehicle. The man was pronounced dead on scene." The drug trade turns cities into slums and brings violence to the suburbs. It is a plague far worse than COVID.