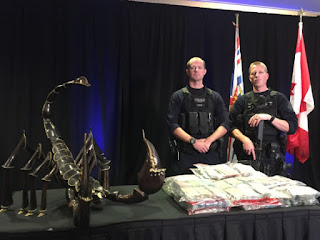 Update: I'm going to have to rewrite this post after I do some more research. More inconsistencies are coming to light. At the time of the high profile bust, Vancouver Police Supt. Mike Porteous stated that the Kang - Latimer group was in conflict with the Brothers Keepers.

Today Pashminder Boparai, Mustapha Ali and Nobin Malonga-Massamba were in courtroom 54. They are all charged with conspiracy to commit murder part of Project Territory. This is where it starts to get a little bit confusing because it realtes to the Delta drug investigation dubbed Project Green Planet and it is also part of Taskforce Tourniquet and Project Territory.

It relates to the Red scorpion drug bust initiated by the Delta Police drug unit. However it expanded to include other agencies. That's where it starts to get fishy. This was that big dramatic publicity stunt targeting the Kang Gang. Everyone mysteriously becomes notorious as soon as you try to sell newspapers.

After the Surrey Six, the Red Scorpions started selling drugs for the Hells Angels instead of the UN. That's when the Bacon brothers had them wearing those ridiculous jackets that looked like a cheap karate school from the /80's. That large Red Scorpion painting and that giant black scorpion statue looked so ridiculous I don't even believe it was real. I think they were fake. 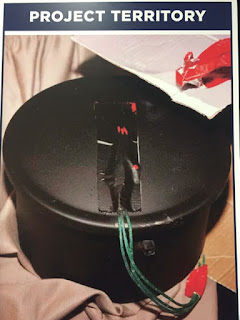 It's possible the RCMP had an undercover agent that said, hey do you want me to make you a pressure cooker bomb and one of the clowns said yeah sure. That is possible but again, it was something the RCMP made and provided it wasn't something local RS dim wits produced.

This isn't Quebec. The gangs aren't blowing each other up here. There's no need to. The CFSU helped the HAs obtain a monopoly on the local drug trade. When Quebec was blowing people up they used dynamite stolen from mines and construction sites not pressure cookers.