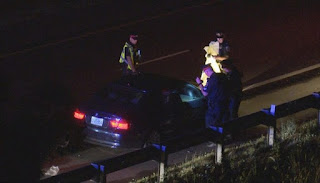 The Toronto Sun is reporting that "One man was killed and another injured by gunfire in Steeltown Friday night - a shooting that unfolded just hours after longtime Hamilton mob boss Pat Musitano was gunned down in Burlington. Hamilton Police say the deadly shooting happened in the southbound lanes of Red Hill Valley Pkwy., near King St., around 10 p.m. The dead man has been identified as 27-year-old Matar Abouchere."

CHCH News is reporting that "27-year-old Matar Abouchere is dead and another received serious injuries in a shooting last night on the Red Hill Valley Parkway. It happened around 9:30 p.m. Police say shots were fired while two vehicles were travelling southbound on the RHVP. They say the shots came from a dark coloured SUV, into the second vehicle, a blue BMW sedan. Matar was driving the BMW at the time of the shooting. He and was able to bring the vehicle to a stop on the shoulder of the roadway where he died. The other passenger in the vehicle was sent to Juravinski Hospital. The SUV fled from the scene, exiting the RHVP at Greenhill Avenue."