I wasn't going to comment on the Seattle fiasco because I didn't want to bring more attention to a small group of raging lunatics then they have already been given but since Lynzee Domanico so eloquently discussed their end game, I will expand on it.

There was an area of six blocks where protesters took over in Capital hill and wouldn't let the police in. Guess what happened? No law enforcement meant murder and rape went unpunished. That is not the type of society I want to live in. Thankfully, the mayor finally saw the light and the barricades were cleared July 1st but the City Council never should have let it happen in the first place. The wing nuts tried the same thing in Portland and Portland didn't let them. It was that simple. We have a duty and a legal obligation to uphold the law.

Putting the local geography into perspective, I lived in Lakeshore village at Rainier Beach south Seattle during the US crack epidemic. I was doing volunteer work with the Guardian Angels supporting law and order. The residents welcomed us as they were being held hostage by criminals. South Seattle and Central district were black areas. U District, just north of the Capital hill Anarchy Zone was white yuppie students. We rarely went there because there was no need.

I have made my position on the murder of George Floyd very clear. Despite the fact that he was a career criminal that terrorized black people according to Candace Owens, what the police officer did to him was completely unacceptable. Defunding the police is not the answer. Making them more accountable is. Police accountability is an important part of the New York Model.

This is ANTIFA's end game. The Anti Fascists are Communists who have teamed up with the Anarchists to create lawlessness as they try to destroy America. Personally, although I am very proud to be Canadian and prefer living here, I would much rather live in the American Republic where civil liberty is protected by law then in a Communist State where there is no civil liberty. No one has any rights in Communism. Look at East Berlin. These spoiled brats have no idea what Communism really is. Poland knows. Ask them. Ask the Falun Gong in China and the Dali Lama. 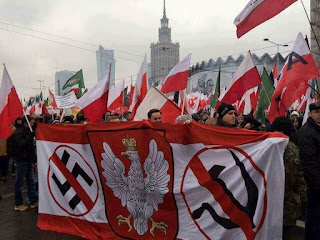 Radical Islam is not a threat to me or my country. Neither is White supremacy. White supremacists and Back supremacists are seen as wing nuts just like Radical Islam is. Communism is the biggest threat to Canada and the world because they are masters of deception. Their lies never end and their persistence was described by Martin Luther King who said: "It is still one of the tragedies of human history that the children of darkness are frequently more determined and zealous then the children of light." Be zealous therefore, and repent.