Coming face to face with your own mortality 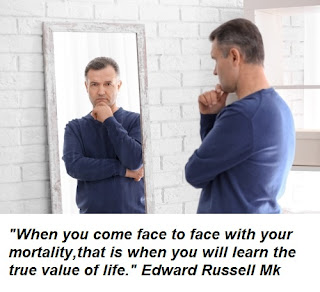 It was refreshing coming home to some Hodge Twins humor after a morbid day at the courthouse. Before I explain, I'd like to pause for a somber moment and once again reflect upon the solemnities of eternity. There were several murders on the court list today and they weren't all gang related. One involved a father and a son while another involved a senseless and brutal murder of a older couple in which the man was disabled and had a walker. The senselessness of the tragedies continued to echo in my brain throughout the day.

Last year I watched my mother die then shortly thereafter I watched my sister die. Now I am watching my brother die and as I look at them I see myself and come face to face with my own mortality. Add that to the Aging Rebel's recent death and I am reminded of a Neil Young song.

Patrick Morley wrote a book Man in the Mirror. I haven't read it but it sounds relevant.