Man charged in racist attack on elderly man in Vancouver 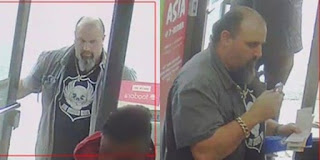 Bill Gates Marxist News Network is reporting that "A man has been charged with an allegedly racist attack on an elderly man in Vancouver in March. Jamie Bezanson, 50, is charged with one count of assault in the attack on a 92-year-old man of Asian descent, according to court documents. Police have called it a hate crime."

There'a little more to the story here. It's a Vancouver Sun article that the MSN linked to without looking into it. They just want to push systemic racism. Watch the video. Look at the guy's shirt. Look at his stature, stance and demeanor. It doesn't take a brain surgeon to do the math.

This isn't a punk rocker attacking an old Asian man to rob him and give him the boots. In the video Jamie Bezanson is waiting in line when an old man with dementia is holding up the line. JB Hawg gets impatient and physically takes him by the arm and escorts him outside then returns to the line. While he's doing this you can tell he's using restraint. He's trying to escort him outside without hurting him. The elderly man falls outside and JB Hawg picks him up and sits him up straight then goes back inside.

JB Hawg is obviously a POS with a specific role to play in the DTES but I don't think what the did was racially motivated. He just lost patience with a crazy old man with dementia. Enforcers for the Hells Angels drug trade in the DTES work beside Chinatown and elderly Asians on a daily basis.

Vince McMurchy is a longshoreman who sold crack cocaine in the DTES. He got Dianne Rock adicted to crack after she had quit drugs and started pimping her out to pay for the drugs. After she was gang raped on the Pickton Farm by bikers and cops she ended up dead.

Like I said, there is a lot more going on here behind the scenes. What JB Hawg did to this frail elderly man was uncalled for but I'm afraid he has done and continues to do a lot worse in the DTES on a daily basis. This act has simply put him on the public radar.